A kinetic/synaesthetic installation by Motherboard (Per Platou and Amanda Steggell) for Galleri F15’s 40 year jubilee exhibition.

«… There are moments when being an art critic feels like a burden, and the act of describing and expressing opinions feels almost perverse in that it is hard to do so without violating the actual experience. Per Platou and Amanda Steggell have created a work that I am so intensely in love with that I am actually a bit embarrassed to talk about it. It is as though the work is custom-made for my private feelings and longings, however I can’t put my finger on exactly what or how. At the same time, it seems to be the exhibition’s most universally accessible work – because it is so instantaneously sensuous. Particularly the use of aroma is so effective that several hours later I could still sense it on me as an aftertouch of a lover’s caress. To experience the work feels like being wrapped in swaddling clothes and laid in a cradle, and the memory of the experience is almost stronger then the experience itself. The installation has become a friend and it is the only artwork that I have ever attempted to hug. It feels sad to have to have to say goodbye, but friends come and go. The parting is endurable because there is hope that we may meet again and everything that has happened in the meantime will generate new things to talk about. It is through moments like these that the art circus proves itself worthwhile after all.»
(Erlend Hammer review in Billedkunst #4/2006) 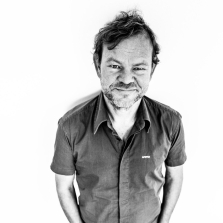 Per Platou (b.1964) is an artist and curator based in Oslo/Norway and Landers/California. He has worked with a variety of media including sound art, installations, music, live art, text, hacktivism, radio, film and theatre. He co-founded the art collective Motherboard together with Amanda Steggell in 1996, who were pioneers in utilizing and combining electronic and networked media formats with live performances and installations in the 1990s. As a curator he has been organizing a number of exhibitions, symposiums, concerts and screenings, incl «Written in Stone – a net.art archaeology» and «Reality Check» (seminar series on failed art projects).